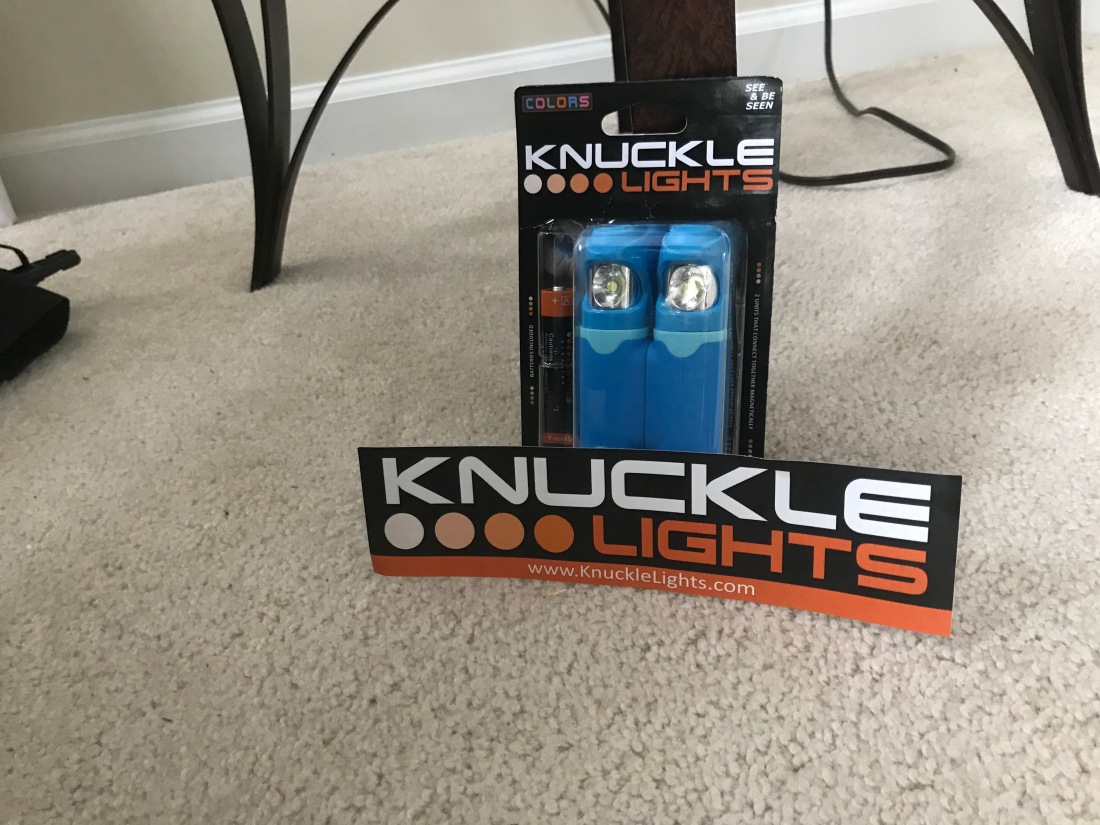 “Disclaimer: I received an Knuckle Lights Colors to review as part of being a BibRave Pro. Learn more about becoming a BibRave Pro (ambassador), and check out BibRave.com to review find and write race reviews!

As a runner, when you are training for a big race, sometimes life gets in the way. When that happens you can find yourself doing EARLY morning runs or evening night runs, to make sure you stay on schedule. It is because of this that I was excited to be able to try out Knuckle Lights colors. I received a pair of the light blue(Go Tar Heels) to test out. Safety is of the upmost importance when doing these type runs, not only is it important for you to be aware of your surroundings but you want your surroundings to be aware of you. Hence, Knuckle Lights have coined the phrase, “See and be seen”. 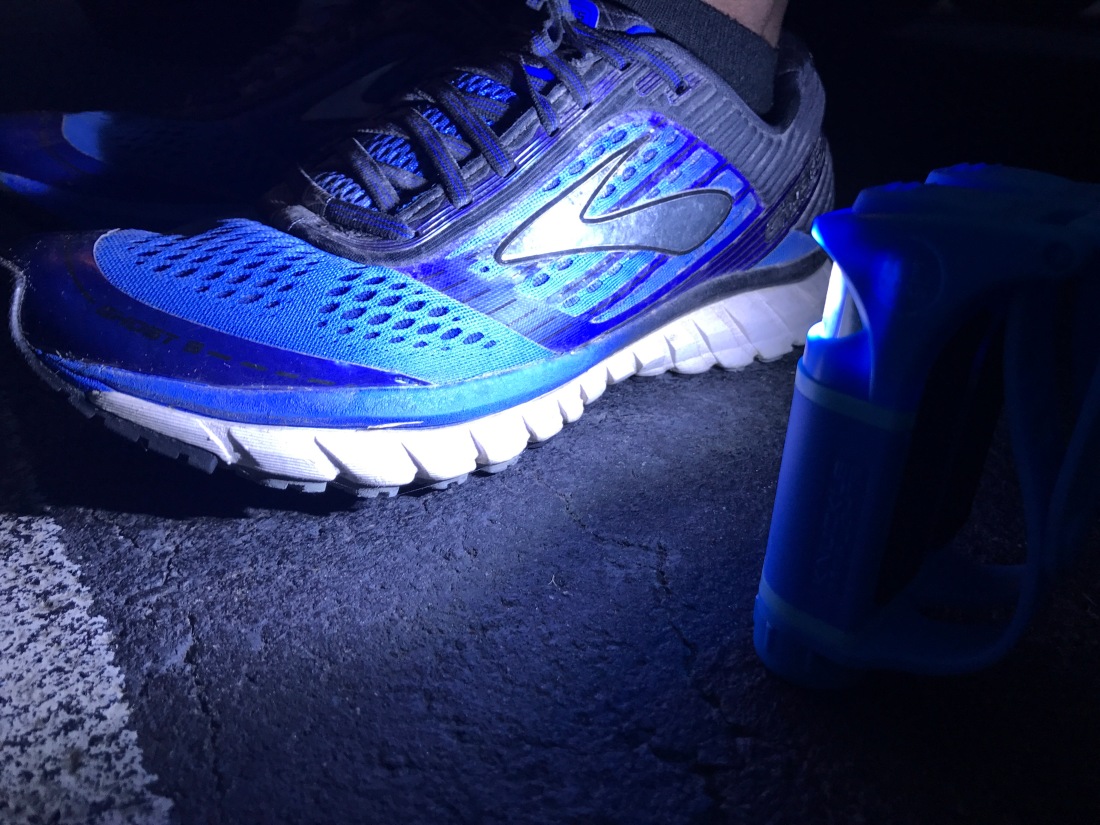 WHAT’S IN THE BOX
The packaging is fairly simple, you receive 2 knuckle lights along with the batteries. Now if you are familiar with the first generation knuckle lights, you would know that the 1st generation were RECHARGABLE but Knuckle Light Colors are NOT. I never had the opportunity to try the first generation but the loss of this option seems to me to be a big blow. The ability to recharge the lights rather than having to run out and buy new batteries is valuable. Batteries don’t last forever, not even energizers. The knuckle lights are magnetic so they stick together to help decrease the chance of misplacing 1. WEAR
The first thing I noticed when I put them on before my run, was just how comfortable they were. Once again, I have heard from fellow runners that the first generation was a bit bulky but the new design seem a bit more streamlined. The straps are adjustable so you can tighten or loosen based of the size of your hand. In the middle of my run, I often found myself forgetting they were actually on my hands. The soft rubber coating helps prevent any unnecessary rubbing to your hands. Besides that, you look pretty bada$$ running in the dark with these beams shooting from your hands. It put me in the mindset of IronMan or even a Transformer. The knuckle lights are also waterproof, so no worrying about sweat or even rain, shorting out your runs.
LIGHT BRIGHT
The lights are 280 Lumens, so they are bright enough to light your entire path and also easily seen by oncoming cars. When I was wearing them, I noticed cars starting to move over from also a quarter mile away. Without the knuckle lights, it would sometimes be almost the last minute before a car realizes and moves over. They are actually bright enough that you can get away with only taking 1 of the lights instead of both. The lights have 3 modes, that can easily be changed by pressing button on top with your thumb. 1. Bright 2. Dim 3. Blinking  4. Off. My preference is the blinking mode. 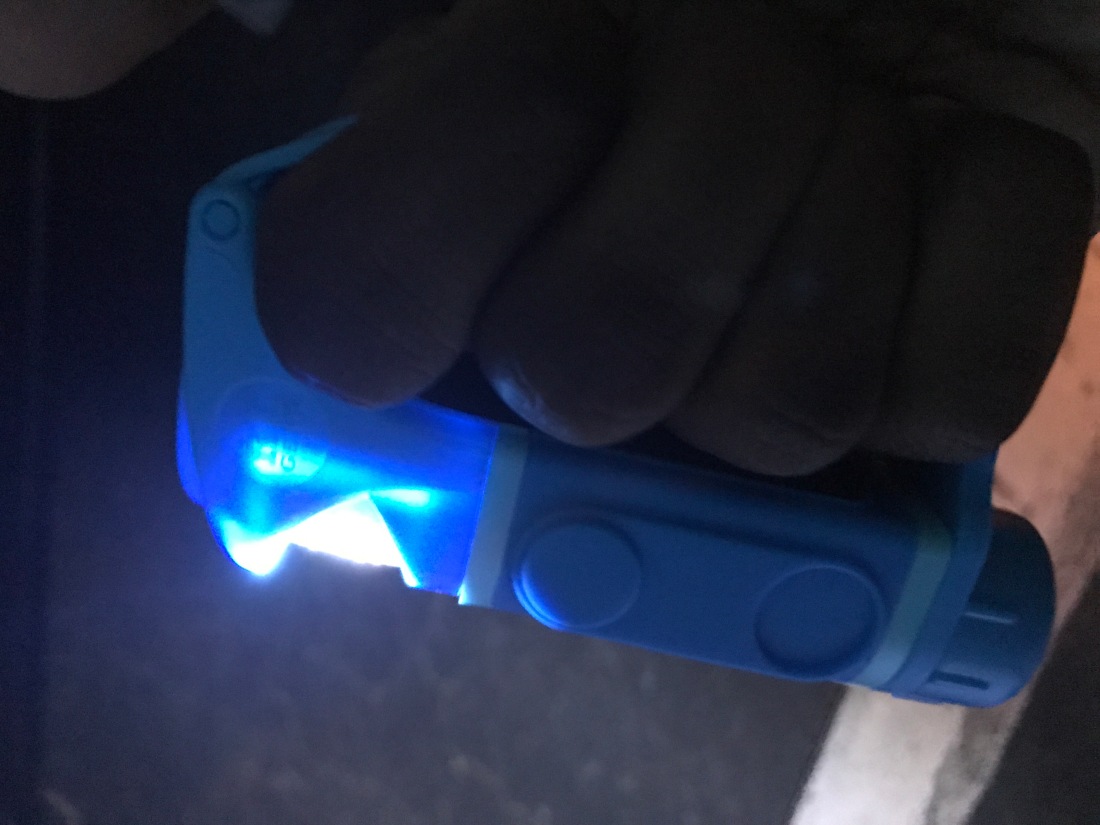 RECOMMENDATION
I would not hesitate to recommend Knuckle Light Colors to any of my running friends. I mean who wouldn’t want to feel like a transformer as they pound out their miles in the dark? The only hangup I have is the fact that they aren’t rechargeable, but I can live with that. You most likely aren’t going to be using them every day so it will be a while before you have to replace your batteries. Are you ready to get your own yet? Use code: BRKL2017 to enjoy 15% off your own knuckle lights. Stay Seen.

Check out what some of my fellow BibRave Pros had to say: 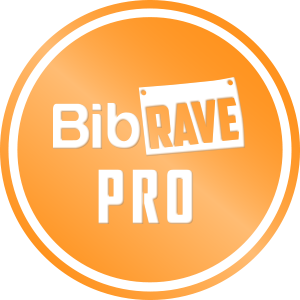